Edit: repo has been updated to include image load and thread creation notification callback support.

This PoC was created to learn more about the power of driver exploits, the practical challenges and impact of kernel writes and the way EDRs use kernel callbacks to get visibility on the system they are meant to protect from harmful software.

In fact, the main driver behind this was the answer given by people in information security when asked: “What can you do when you can read and write kernel memory?”. The answer invariably being:

As with so many Windows-things, a lot of the information that is available around these kernel callback structures is available because of the work of Benjamin Delpy, specifically the source code for the Mimikatz driver (Mimidrv), which I’ve had to pour over multiple times to gain an understanding of how this all works.

The driver exploit used for this code was discovered and disclosed by Barakat and was assigned CVE-2019-16098. It is a signed MSI driver that allows full kernel memory read and write, which turns out to be extremely useful for attackers and allows for a full system compromise. The PoC shows the ability to run a SYSTEM cmd prompt when logged in as a low privileged user.

That exploit was brought to my attention by this blog post, which uses the exploit to remove the Protected Process Light from LSASS. Parts of the code in this blog post and associated repo are based on Red Cursor’s work.

A large portion of my understanding of how to enumerate the callbacks was informed by SpecterOps’ Matt Hands’ excellent article exploring Mimikatz’s driver, Mimidrv, in depth. Having this write-up available helped a lot in understanding the Mimidrv code.

I am not an experienced coder and the code is probably awful and hacky. If you have any suggestions or comments, feel free to get in touch.

As most people who read this post will probably already know, the memory space in Windows is divided mainly into Userland memory and Kernel memory. When a process is created by a user, the kernel will manage the virtual memory space for that process, giving it only access to its own virtual address space, which is available only to that process. With kernel memory, things are different. There is no isolated address space for each driver on the system - it is all shared memory. MSDN puts it this way:

This of course puts a massive onus on the developers of these drivers, and on the Operating System for preventing the loading of arbitrary drivers. Microsoft has therefore put severe restrictions on what drivers can be loaded on the system. First, the user loading the driver needs to have permission to do so - the SELoadDriverPrivilege. This is by default only granted to Administrators and Print Operators, and for good reason. Just as with SeDebugPrivilege, this privilege should not be granted lightly. This article by Tarlogic explains how the privilege can be abused to gain further privileges on the system.

Second, Microsoft has put in Driver Signature requirements for all versions of Windows 10 starting with version 1607, with a few exceptions for compatibility. This means that, in theory, any recent workstation or server that has Secure Boot enabled will not load an unsigned or invalidly signed driver. Problem solved, right?

Unfortunately (depending on your point of view), software is written by people and people make mistakes. This also goes for signed drivers. Even with the requirement of drivers being signed before they can be loaded, all an attacker needs to be able to do is find a driver that has vulnerabilities that allow for the arbitrary read/write of kernel memory. The Micro-Star MSI Afterburner 4.6.2.15658 driver has exactly these sorts of vulnerabilities.

There are many other signed drivers out there that can be used, some game hacking forums have collected lists of these drivers and the vulnerabilities present. As there is currently no native way to stop validly signed but known vulnerable drivers from loading, it looks like loading these drivers will be a valid technique for quite a while to come.

When Microsoft introduced Kernel Patch Protection (known as PatchGuard), in 2005, it severely limited third party Antivirus vendor’s options of using Kernel hooks to detect and prevent malware on the system. Since then, these vendors have had to rely more on the system of kernel callback functions to be notified of events. There are quite a few documented and undocumented callback functions. The specific functions we are most interested in are:

In this post I will be focusing on the process creation callback routine - PsSetCreateProcessNotifyRoutine.

Simply put, drivers can register a callback function that is called every time a new process is created on the system. These functions are registered and stored in an array called PspCreateProcessNotifyRoutine, containing up to 64 callback functions. Using Windbg, Matt Hand explains step by step how to view this array and how to figure out, for each registered callback function, which function in which driver this resolves to, based on the Mimidrv source code.

Summarised, these steps are:

I encountered some strange technical issues which are most likely due to my ineptitude in coding in general, so I opted for a lazy shortcut: I calculated the offset from the exported function PsSetCreateProcessNotifyRoutine on Windows 10 version 1909, which seems to be somewhat reliable and has been tested on 2 test VMs and a personal workstation. The offsets seem to change between Windows versions and for now I’ll likely update them for 1909 and 2004 until I can get the byte pattern search to work properly and can rely on that.

Once we find the array of process creation callback routine pointers, the memory address they point to can be calculated as follows, as explained by Matt:

The resulting address is the address that will be called whenever a process is created. Using this address, we can calculate exactly which driver is loaded in that section of memory and see what driver will be snooping on our process creations.

If we want to enumerate and remove existing callbacks, we need to replicate these steps in our program. I will assume the vulnerable driver has already been loaded and we have a reliable memory read and write function.

Now, let’s calculate our offsets for Windows 1909 for the callback array of PspCreateProcessNotifyRoutine:

It looks like the callback array lives at PsSetCreateProcessNotifyRoutine + 0x24D810 in this version of Windows.

Now, let’s use our memory read functionality so kindly provided by the MSI driver and the author of the driver exploit, to retrieve and list these callback routines. We also add functionality to specify a callback function to be removed:

The FindDriver function took some more work and is probably the worst code in the whole repo, but it works… We basically use EnumDeviceDrivers again, iterate over the driver addresses, store the addresses that are lower than the callback function address and then find the smallest difference. Yeah, I know… I’m not going to include it here, feel free to check it out in the repo if you want to suffer.

Great - so now we have achieved the following:

Time to test it out!

Now, I know Avast isn’t really an EDR, however it uses a kernel driver and registers process notification callbacks, and so is perfect for our demonstration.

Running mimikatz causes Avast to kick into action, as expected: 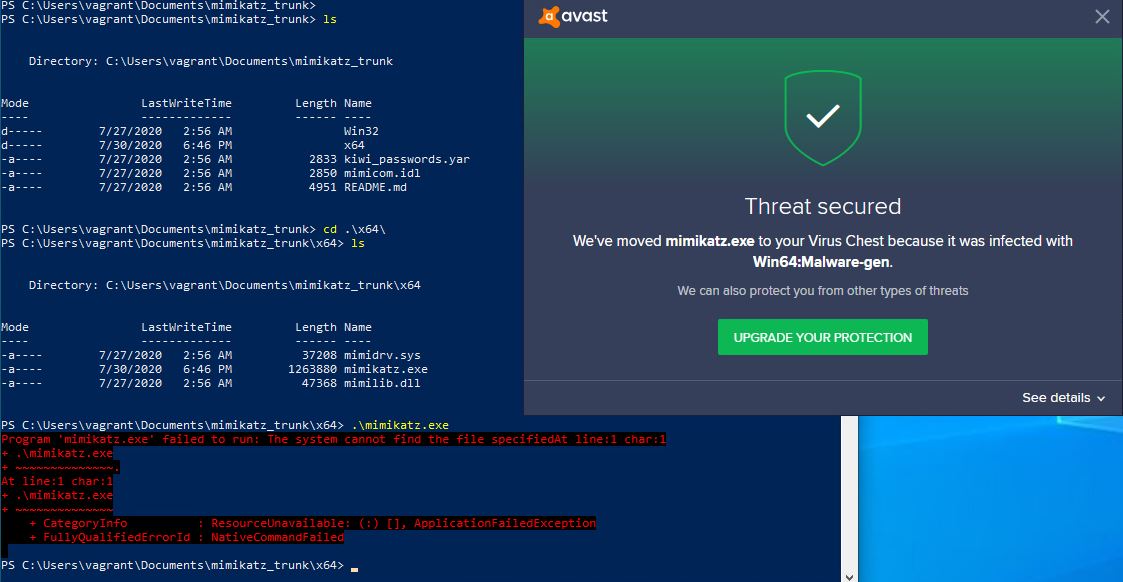 Loading up our program, we get the following output:

A quick google search shows us that aswArPot.sys, aswSP.sys and aswbuniv.sys are Avast drivers, so we now know that at least for process notifications, these drivers might be blocking our malicious tools.

We unload them using our little program (the output has been made a bit more verbose than it probably should be):

We repeat this for the remaining two drivers and confirm the drivers are no longer listed in the callback list:

Windbg view (note the blocks of zeroes where the callback routines were previously listed):

And we can now run Mimikatz unencumbered: 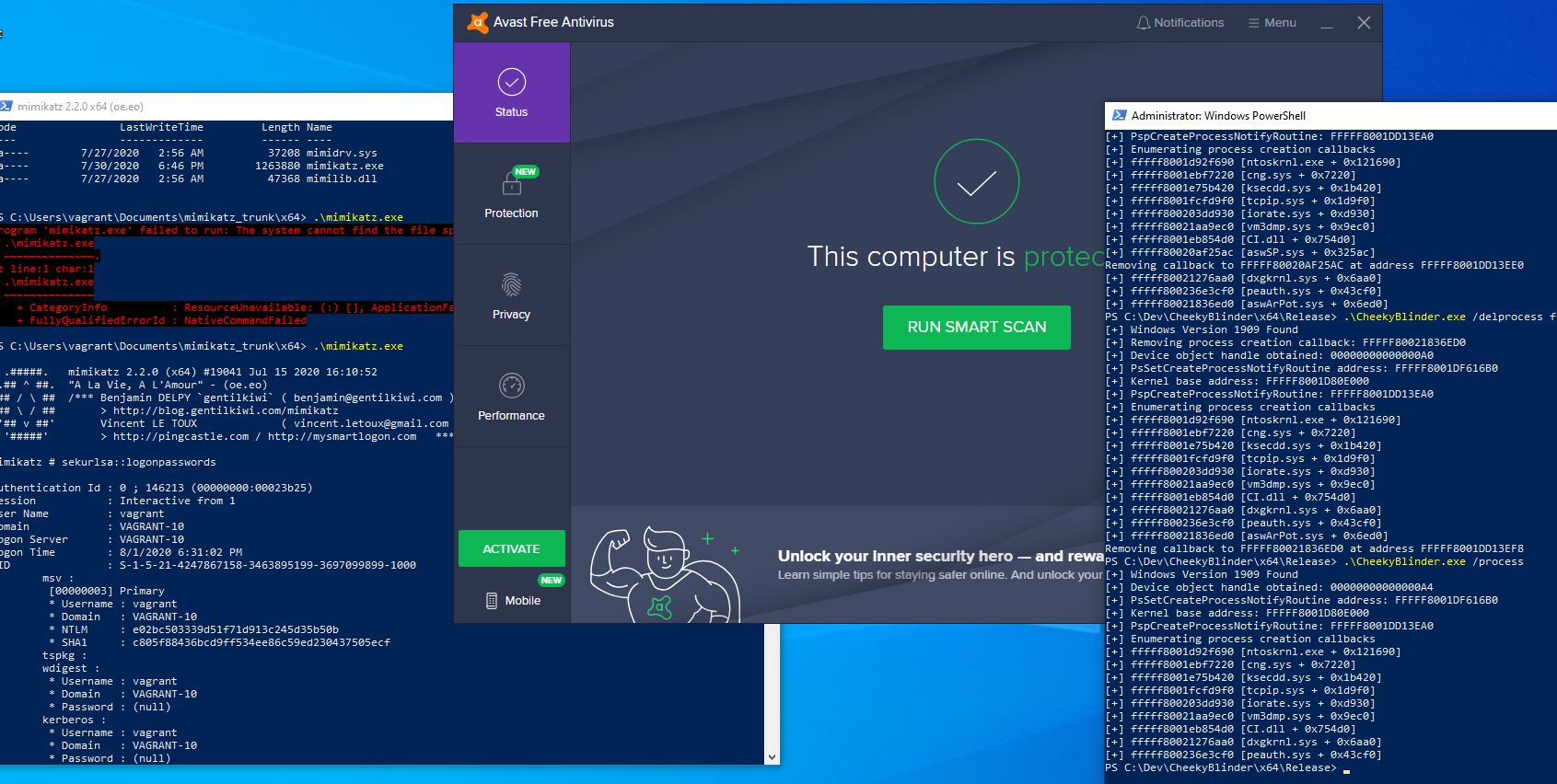 As far as detection and prevention goes, I think some easy wins can be achieved by the blue team, but maybe less so for the EDRs. For the EDR vendors, the task of keeping tabs on which drivers are vulnerable would be hard to achieve as it then likely just becomes a classic game of signature detection, and doesn’t account for zero-day vulnerabilities (which a lot of the major players seem to advertise as a core feature). Even more so as far as remediation goes. Some more effort should also be put into self-protection against these types of attacks, although the most obvious ways of doing this (monitoring for the presence of the callback routines) will almost certainly lead to race conditions.

For the blue team, monitoring for service creation and the use of the SELoadDriverPrivilege privilege should give you some visibility into this. Drivers realistically shouldn’t be installed regularly and only during updates/maintenance and by privileged accounts. Further restriction of this privilege from administrative accounts might also be an avenue worth exploring, with the privilege reserved for a dedicated software/hardware maintenance account whose use is strictly monitored and disabled when not in use.

There is still more functionality to be implemented. I plan on adding support for the other callback routines very soon, as well as probably adding a way to restore previously removed callbacks. More work also needs to be done on reliably finding the PspCreateProcessNotifyRoutine array and putting checks in place if it’s likely to fail, as this will cause Blue Screens Of Death (trust me). Finally, it would be good to find some indicators of this activity using known blue team tools such as Sysmon to detect this activity in an enterprise environment.

CheekyBlinder has been released here. Please use responsibly, the code is not great and can cause BSODs. Only supported on Win 1909 and 2004 for now.

While preparing for my upcoming OSCE exam I have spent many hours exploiting Vulnserver’s various vulnerable functions in different ways. In this post, I wanted to highlight a technique I first came across on a Hack The Box write-up of the BigHead vulnerable machine by mislusnys, which can be found here. All credit for this technique goes to them, I am merely using it to exploit a similarly small buffer space without making use of an egghunter or re-using sockets.